The SeaBASS validation system is designed to provide ground-truth comparisons between in situ measurements and coincident satellite-borne ocean color instrument observations. The results are displayed and distributed via a web-based search engine, available for assessments of satellite measurements and algorithm performance. This article briefly summarizes the following steps involved in this system of creating match-ups: 1) Assembly of in situ data; 2) Reduction of in situ data to relevant observations; and 3) Preparation of coincident satellite imagery.

Assembly of in situ data

Submissions archived within SeaBASS are the primary source of data used for validation analysis. These data are provided by NASA-funded researchers as well as U.S. and international collaborators and voluntary contributors. After data files have been archived in SeaBASS and made available via the File Search engine, a separate process is begun where satellite-relevant-measurements are queued for further evaluation for their suitability for inclusion in the validation dataset, as explained in the next section.
In addition to using data from the SeaBASS archive, SeaBASS staff search external sources for supplemental data that are suitable for validation analysis, such as measurements from AERONET-OC (Zibordi et al., 2009). Large, non-SeaBASS data sets used for validation are given distinct labels that can be optionally selected in the Validation Search, but such data are kept separate by default. While SeaBASS distributes any such successful match-up results using the Validation Search, it does not typically redistribute the source data for such data in the File Search (as that would be redundant with the original hosts).

A guiding philosophy for the validation system is to select the best available comparison between each satellite observation and a corresponding ground truth measurement per time and location. To accomplish this principle, the validation dataset is built by reducing measurements made at a given station to one representative sample (Werdell & Bailey, 2005).

The bidirectional reflectance distribution function (BRDF) is calculated for in situ Rrs validation measurements to obtain the "exact" normalization as described by Morel and Gentili (1991, 1993, 1996) with alterations described by Gordon (2005). This BRDF correction is applied for consistency with the satellite product, using the same look-up tables and approach as the satellite processing code (Bailey and Werdell, 2006). At this time, Rrs measurements used for validation are not convolved to sensor specific spectral response functions.

L2gen software is used to produce satellite data determined to be coincident with the in situ portion of the validation dataset. Satellite match-ups are created following the methods in Bailey and Werdell (2006) and the results between successfully matched coincident in situ and satellite measurements are made publicly available via a web-based search engine. The satellite reprocessing version is indicated, and the validation results are assessed and reprocessed whenever the NASA Ocean Biology DAAC (OB.DAAC) releases an updated reprocessing version for a supported satellite sensor.

Satellite measurements are derived from a box of pixels (i.e., 5×5) centered over the location of the in situ measurement. The satellite value is defined as the filtered mean of unflagged pixels in the box, and the spatial homogeneity and other quality criteria at the validation point are evaluated. The closest pixel to the in situ location does not have to be clear, as long as there are sufficient valid pixels in the box that meet the homogeneity requirement. Refer to Figure 1 below for more details, adapted and updated from Bailey and Werdell (2006).

Since in situ data are rarely collected at the precise moment when a satellite views their location, we allow a time window threshold around the ground truth observations. A ±3-hour window around the validation points is used. The length of that window is a compromise between being short enough to minimize differences due to temporal variability in the ocean, and being long enough to create a sufficient volume of successful match-ups with satellite observations.

We avoid the use of any reduced resolution satellite products whenever possible. For example, SeaWiFS Global Area Coverage (GAC) files are not used if either a LAC or MLAC file version can be selected instead.

B) Avoid multiple valid satellite overpasses per in situ point

For a given in situ point, it is possible for a particular satellite sensor to make multiple observations across multiple orbits that are each within the acceptable time window (this occurs more commonly at high latitudes). In such cases, just one successful measurement is selected by assessing the time differences between satellite and in situ pairs, and range of sensor zenith angles for all satellite observations. If the range of angles is less than 10 degrees, then the match-up with the smallest time difference is picked; otherwise, the satellite measurement with the smallest zenith angle is selected.

Along-track in situ measurements (i.e. multiple casts or high frequency along-track measurements from a survey) are excluded if they fall within the bounds of the box of pixels defined as a match-up for a previous validation point. The in situ data record with the smallest time difference from the satellite data record is used as the starting reference point for the along-track exclusion. 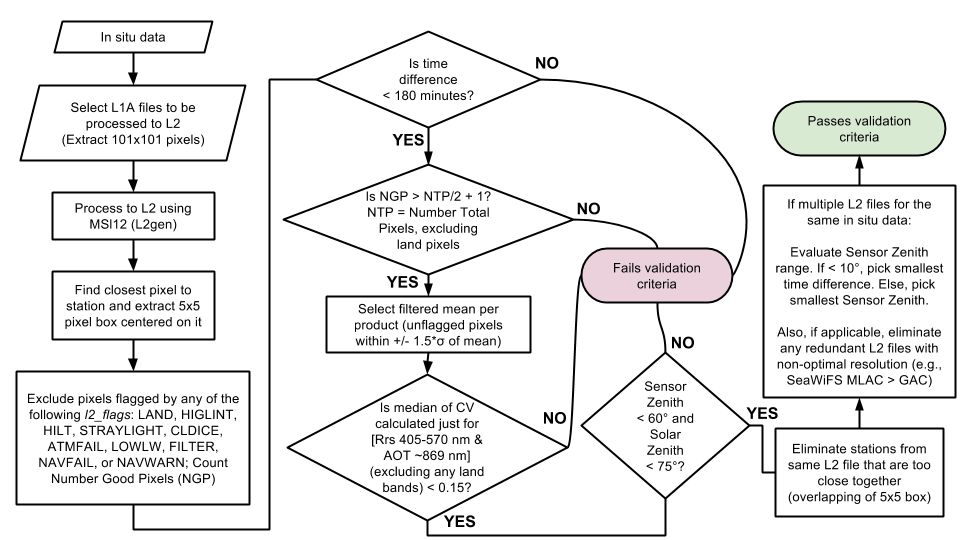 Morel, A., & Gentili, B. (1991). Diffuse reflectance of oceanic waters: Its dependence on sun angle as influenced by the molecular scattering contribution. Applied Optics, 30, 4427−4438.